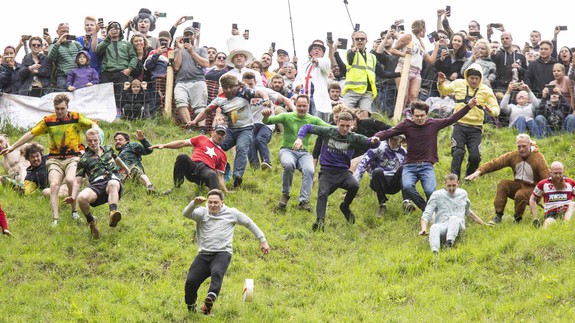 Some people will do anything to get cheese, no matter the cost.

Contestants at the annual Gloucestershire cheese rolling festival risked injuries as they raced down a steep hill to capture cheese on Sunday. The winner of the women’s race, Flo Early, announced her retirement from cheese-chasing after spraining her ankle.

Watch as they tumble for glory and for cheese.

The official competition was canceled in 2010 because of threats made by spectators. But a rogue version survived.

SEE ALSO: The cursed ‘vegan lasagna’ is simply not a lasagna

Nowadays, contestants don’t even chase after real blocks of cheese. Rather, they’re fighting to capture a lightweight foam cheese. The winner is eventually afforded a real cheese for their hard work. Read more…